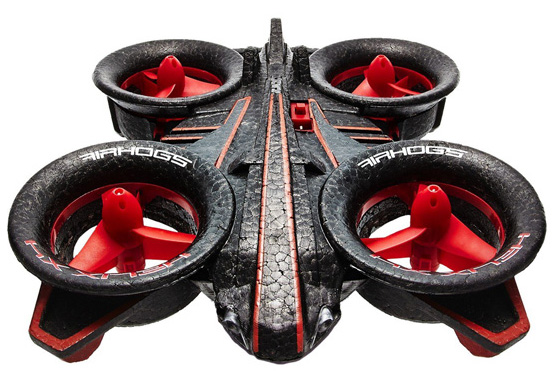 is a uniquely designed quadcopter made with a frame of tough, flexible polystyrene foam which encases the rotor blades.  This coupled with the "recessed fan" design of the rotor blade casings makes it very tough, durable and safe to fly indoors, as the flexible polystyrene gives when the quadcopter crashes into things, thus protecting itself and your walls and furniture.  That said, if you crash it with enough force, chunks of the frame will break off although it doesn't seem to affect flight performance, and they can be glued back on.  This is as well, because there are no replaceable parts on this quadcopter, including the battery.  Unfortunately this means that you are stuck with your 7-8 minutes of flying fun before you have to plug it back in to charge for an hour.  It also means that this drone has a limited life, and if the battery or any of the motors or rotor blades fail, you will have to buy a new quadcopter.

does not come with a camera and due to its size it would not carry a third party camera either, so this makes it a lot less versatile than other drones in this price range.

A unique feature of the Air Hogs Helix X4 Stunt

is that you can charge it from the controller as well as via the USB adaptor, which is probably why the controller takes a whopping 8 x AA batteries which aren't included.  The controller itself has a retractable cable for charging the drone, as well as dual flight levers for controlling throttle, pitch, yaw etc.  The Air Hogs Helix X4 Stunt

's gyro stabilisation means it is stable in the air, but although the model is called the Stunt, it is not as agile and manoeuverable as it's name would suggest. The drone has two flight modes, Novice and Expert.  In Novice, it is a lot slower and not particularly responsive to the controls and so can be harder to fly than in Expert Mode.  Even in Expert mode, the acceleration on the Air Hogs Helix X4 Stunt

isn't very fast, which makes it good for beginners and for flying indoors, but it also means that if flying outdoors it wont cope with any sort of wind.  The lights on the quadcopter tell you which mode you are in, Green = Novice and Red = Expert.  If the lights are flashing it means that the battery is low.

There are two trim buttons on the controller but they are dummies and don't work, the theory being that the manufacturers think the quadcopter is so stable in flight that they are not needed.  In reality it means that you can not fine tune the flying of the Air Hogs Helix X4 Stunt

and as a result it tends to drift and you can't do much about it.

There is a stunt button on the controller with 3 settings, and depending on which one you select the Air Hogs Helix X4 Stunt

will perform back flips, barrel rolls and 180 degree flips.  These are a big selling point of the quadcopter, but to be honest It can be difficult to tell the difference between them, and with the low motor power of the Air Hogs Helix X4 Stunt

it stuggles to recover from stunts, therefore you need a lot of height before you perform them.  The quadcopter will climb automatically before it performs a stunt, so if you are too near the ceiling it will crash into it.

In our opinion, the Air Hogs Helix X4 Stunt

is greatly overpriced compared to other drones.  The build quality is not particularly great, it has no camera, a non-replaceable battery and no replaceable parts, and its flying performance is about average.  You are basically paying for its unique design and its durability, so in that sense it is great for kids, and it is ideal for flying indoors as it wont damage your walls, ceilings or your telly when you crash into them!  Its great for having fun indoors, but if you want a more versatile drone that you can fly outdoors, there are better buys out there.