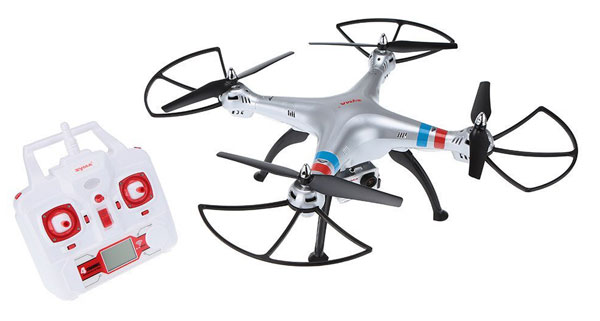 is a large (50cm x 50cm) quadcopter with a 6-axis gyro which keeps it very stable during flight, and its size gives it good wind resistance.    It features its own Syma 8MP camera modelled on the GoPro, however unlike the GoPro, this camera cannot be used on its own as it takes its battery power from the Syma X8HG

itself so it will only work with this drone.  Unfortunately the quick release camera mount does not fit other cameras like the GoPro or the SJ400, but other compatible mounts can be purchased relatively cheaply.

The Syma camera itself is excellent quality, it shoots in either 1080p at 30 frames per second, or 720p at 60 frames per second, plus it takes 8MP still photos. The images are sharp, with adequate contrast and colour saturation.  You control the camera via the drone's controller and you can start or stop recording, and take stills during flight, which you are unable to do with a GoPro. As it only has a fixed mount rather than a gimbal, the still images are better quality than the video footage.  It records to a micro SD card which is included with the drone.

The flight time of the Syma X8HG

's battery is around 6-10 minutes minutes, depending on weather conditions and flying style, and the charge time is approx. 120 minutes.  The control distance range is quoted as 70 metres, but it will fly further than this, up to around 200 metres.   The controller is designed to take 6 x AA batteries (not included) but it will function with 4.  When controlling the Syma X8HG

, if you press the top left button quickly you can switch between Beginner and Advanced mode.  If you press it for a little longer you activate the Headless flight mode.  The build quality of this drone is excellent and it flies very well, it will also perform an impressive 360 degree eversion stunt at the press of a button.

is shipped almost Ready To Fly, you just need to install the landing skids, the camera, the rotors (follow the instructions as the A and B Rotors are different) and install batteries in the drone and the controller.  Syma X8G Spare Batteries

and spare parts are readily available including replacement motors which plug in without needing to be soldered.

All in all the Syma X8HG

is a really great drone, with excellent build quality and a fantastic camera.  It fun and easy to fly with some cool features like the Headless Mode, and its stability in the air means it takes smooth video footage.  Spare batteries and parts are also readily available.  It is a shame the camera cannot be used on its own, but that is a minor niggle really.